As insurance brokers, we are all about helping people to manage risk and live their best lives—whether that’s in a personal or business capacity. We love to take that mission beyond the insurance industry and get involved in the community, contributing to other organisations that are enriching the lives of New Zealanders in different ways. Supporting people in their passions, hobbies, and callings is our privilege, whether that be through our risk management and insurance assistance or our financial contributions to various groups.

The arts is one aspect of life that, we believe, makes it all the more worth living. Our company is honoured and happy to support several performing arts organisations in the Canterbury region, as well as sports teams and other groups. This time, we are highlighting a partnership of which we are particularly proud: Runacres Insurance and the iconic Isaac Theatre Royal.

The Isaac Theatre Royal is considered by many to be the spiritual heart of the Canterbury arts scene. It has been entertaining audiences for more than a century, located in Gloucester Street in the centre of Christchurch city. This stunning venue displays every bit of that rich heritage; the original building has been added to over the years to result in an eclectic theatre full of life and atmosphere. It is attractive inside and out, a true asset to the city and the location of many memorable shows and events.

The first Theatre Royal opened in Christchurch in 1863 and was located across the street from the current one. In 1876, it was rebuilt and the newer, bigger theatre served the growing city for several decades. Work on the third (current) theatre building began in 1906 to meet increased demand, and it was billed as one of the best of its kind in the southern hemisphere. That proved to be true: even now, a hundred years on, the Isaac Theatre Royal is an exemplary venue.

A major redevelopment in 2004 and 2005 upgraded the facilities significantly while retaining heritage features. Significant damage during the Canterbury earthquakes in 2011 meant more work had to be done to the theatre, but thankfully earthquake and fire protection work had been done earlier which greatly reduced the adverse effects of the quakes.

The variety of performers that has graced the stage of the Isaac Theatre Royal over the hundred years adds to the incredible history. Now and always, ITR has offered shows and events of all kinds: plays, dance, musicals, festivals, films, poetry, and more. There is a long and storied tradition of showcasing a huge range of performing arts on the theatre’s grand stage!

Locals in support of locals

Supporting arts through amazing organisations such as the Isaac Theatre Royal is a point of pride and a pleasure for the Runacres team. Performing arts in particular are so enriching to the community, not only providing a creative outlet for the musicians, actors, singers, dancers, and other artists but also offering a place for anyone to gather, enjoy a show, ponder, learn, and connect.

A theatre like the Isaac Theatre Royal is a venue for people to come together and encounter art of many different kinds brought to life. A night at the theatre is the ultimate evening out, and for good reason as live shows are emotive, thought-provoking, and inspiring.

We are a Kiwi company that likes to support locals in living their best lives. Our sponsorship of the Isaac Theatre Royal is just one of the ways we can do so, encouraging the practice and enjoyment of performing arts in Canterbury. 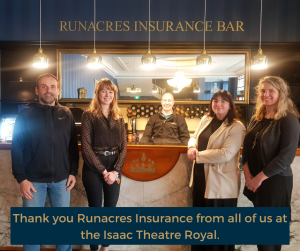 We love the idea of sponsoring the spot where people gather pre-show to chat and post-show to discuss. The bar plays a huge role in the social aspect of a night at the theatre.

Supporting our community and encouraging the performing arts in Canterbury is one of our greatest pleasures. We love a good night out at the theatre and our continued sponsorship of the Isaac Theatre Royal ensures that this is always a possibility!