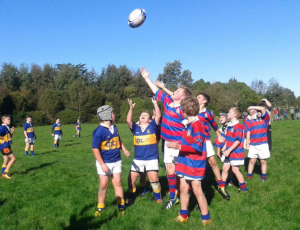 Like many Kiwis, rugby is a part of our DNA here at Runacres. From grassroots, to provincial through to supporting our boys in black, we can’t help but get behind our nation’s favourite sport.

We believe though, that encouraging healthy and positive involvement with the sport starts by nurturing our youngest players. Giving youngsters in our community the opportunity to develop, learn, excel and build friendships through sport is something we’re glad to get behind. It’s in the clubrooms of local sports grounds that a lifelong love of sport is formed and where communities come together to connect through a shared enjoyment of the game.

Which is why we we’re proud to have sponsored Lyttelton Rugby Club’s Under 12 rugby team’s annual Titahi Bay trip.

More than a rugby match

More than half a century later, and the battle still goes on!

Importantly though, this is more than a friendly competition between two proud clubs. It’s a chance to help build confidence in young players as they spend time away from home, staying with a billet family. It pushes many players out of their comfort one, and so many of them return home with more life skills and confidence.

These young men are in good company. Many successful sportsmen have participated in this long-standing event, including former All Blacks Steven and Graham Bachop, Aaron and Nathan Mauger, Ben and Owen Franks, Jerry Collins and TJ Perenara, as well as golfer Michael Campbell.

To think this trip could play a part in the making of some future sports stars is an exciting prospect!

Most of us are aware of the physical health benefits of playing sports from a young age – strength, coordination and fitness. But being involved in a team and club environment also brings with it other factors that are critical to the healthy development of our younger members of the community. Things like friendship, leadership, responsibility, accountability, self-esteem, perseverance, empathy and pride. These are all characteristics that the younger generation can call on as they continue to develop socially and cognitively, and begin to contribute in other ways to their communities.

Lyttelton Rugby Club is a family-oriented club for both junior and senior players. Like most community organisations, it relies on the generosity of volunteers who give their time to help run the club, coach teams, support the club community and fundraise for trips such as this.

We know that sponsorship from businesses like ours goes a long way to ensuring that this trip, and other club initiatives, are possible for the club’s young players. As a Canterbury-based business with offices across New Zealand, supporting locals is a part of our business philosophy. Helping you protect whatever it is that matters most to you means you can focus on doing the things you love, free from the concern of financial burden should the unexpected happen. Click here to learn more about our products and services.

We’re looking forward to seeing these young players develop further, and who knows, perhaps we’ll see their names on the back of a black jersey one day.